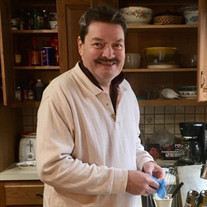 Not sure what to send?

Life of Glenn Glenn came into this world born the 3rd child of Lester W. and June Bohne. His older brothers were Lester C. (known to family as Butch) and Dave; his younger brother was Tom. After the death of June, Lester remarried Arlene Kotan, and Glenn instantly acquired a new mom, a sister, Cindy, and another brother, John. When all was said and done, Glenn’s childhood household consisted of two parents, six kids, a grandmother, and a dog named Tippy. Glenn was also blessed to have countless aunts, uncles, and cousins, too numerous to name who lived nearby. Glenn is survived by brothers Dave (Kim), Tom, and John (Mary); nephew Zach (Lisa); nieces Alison--his goddaughter, Andrea (Sean), Crystal, and Samantha, and was preceded in death by Lester W., June, Arlene, Lester C., Cindy, and long-time companion Bernice Varney. Glenn lived in or near Palos Heights all of his life. Actually, he was there two years before Palos Heights was incorporated. He grew up in the house that Lester built on 125th Street, which was known by family and friends simply as Bohne Road, being a dead-end pot-holed gravel lane that was literally owned by his grandfather. Bohne road was magical for a kid growing up—ponies across the street, garter snakes in the grass, and lots of siblings and cousins to play with. The kids freely roamed the surrounding fields playing “monstrosity” or army or whatever. Glenn modified his first bicycle with a banana seat and suicide handle bars. Then he was the first of the kids to get a 26” Schwinn ten speed (a Varsity model). Glenn attended elementary school at First Lutheran in Blue Island, then Indian Hill and Crab Orchard in Palos Heights. He graduated from Harold L. Richards high school in Oak Lawn. Glenn’s family took vacations at Summit Lake in Wisconsin where Grampa Bohne had a small cottage. He played with his siblings and cousins on a small sand beach and fished in Grampa’s rowboat. Later, Glenn learned to water-ski behind the same rowboat after Lester’s 18hp Evinrude was installed. The story of Glenn cannot be told without mention of Dunlap’s Restaurant. He started working there busing tables. When he was old enough, he worked as a porter and a bar-boy, and then a bartender. Like any bartender, Glenn knew all the best jokes. But Glenn could tell a joke better than anyone. When Glenn would start to tell a joke, he’d get that grin, and you would be laughing before he even got to the punch line. By the time Dunlap’s was sold, Glenn had done every job imaginable there and became general manager, assisting the owner with the day-to-day. All told, he worked there 25 years. Anyone who knew Glenn well could and would attest to the fact that he was a good-hearted man. He believed in God and family. He will be remembered fondly and missed by the many who loved him.

Life of Glenn Glenn came into this world born the 3rd child of Lester W. and June Bohne. His older brothers were Lester C. (known to family as Butch) and Dave; his younger brother was Tom. After the death of June, Lester remarried Arlene... View Obituary & Service Information

The family of Mr. Glenn A. Bohne created this Life Tributes page to make it easy to share your memories.

Glenn came into this world born the 3rd child...