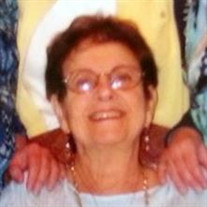 Marion Speropulos-Wilson-Skipworth age 88 of Wheaton, Illinois and formerly of Orland Park and the Beverly area of Chicago, Illinois. Passed away Sunday, March 29, 2015 at her Home at Westbridge Assisted Living . Loving mother of Sherry Lord PHD, Karen ( George ) Paytash and Linda Punter, She was the cherished grandmother of Marc ( Brittany ) and Brandt ( Renee ) Mylott, Carrie Hoffman and Jennifer ( Jason ) DeHut, and Adam ( Bonnie ) Punter, Amy ( Christos ) Rojas and Amber Punter. Her adoring grandchildren gave her a wonderful addition of 17 great-Grandchildren. Marion was well known for her devotion to Girl Scouting with her 3 daughters, her side-by-side work with her loving husband Ted at the “Maple Leaf” Restaurant in Downtown Chicago, her love of Real Estate with Doris Brown Realtors and her exceptional skills as a seamstress. After Ted’s death in 1977, she married Jim Wilson in 1981, adding 3 step-children to their family, and later in 2003, after Jim’s death, she married Richard Skipworth and was a favorite to their extended family. She moved into Wyndemere Independent Living in Wheaton, Illinois in 2001 and remained in the complex til her death on Sunday. She was a new resident greeter, and part of the handbell choir… plus she still performed tap dances with several of her resident friends til 2011! Visitation Friday April 3, 2015 1:00 pm until time of Services 2:00 pm at Van Henkelum Funeral Home 13401 S. Ridgeland Ave. Palos Heights, Il. 60463 (Located in Westgate Plaza). Interment Chapel Hill South Cemetery, Oak Lawn,Illinois. In lieu of flowers please make donations to the American Lung Association 55 W. Wacker Drive Suite 800 Chicago, Illinois 60601 in Marion’s name. For additional Information please call 708 448-3530 or www.vanhenkelum.com

The family of Mrs. Marion Speropulos-Wilson-Skipworth created this Life Tributes page to make it easy to share your memories.

Send flowers to the Speropulos-Wilson-Skipworth family.